Camera traps or trail cameras are automatic photographic devices that are triggered by movement. During the last decade they have become more affordable, and nowadays camera trapping is a widespread technique used in game and wildlife management as remote cameras are very versatile.

Familiarise yourself with the kit: Making mistakes while using cameras is common and can lead to missed information. Take some time to read the instructions and set the camera up in a garden to get used to the device, as this will save you time and effort in the future.

Sensors: Passive infrared (PIR) sensor cameras are the most popular models and are triggered by heat and movement. With this system, the beams or rays of the PIR diverge as you get further from the camera.

Detection area: The area or distance from the camera in which the sensor can detect an animal. It varies depending on the camera model and it is crucial to get the right shot, as the camera will not be triggered if animals are too far away.

Housing and setting: When cameras are exposed to severe weather conditions, or to stop the camera being stolen, we recommend that durable housings or lockable metal cases are used. When setting the camera, make the most of existing features (fences and trees) or simply using poles or tripods. Once the camera is set up, it’s a good idea to take a photograph of yourself to make sure the camera is working correctly.

Trigger speed: This is the time between the sensor detecting an animal and the camera taking a picture. The lower the trigger speed (e.g. <1 second), the higher the chance of photographing the target.

Time-delay: The period of time between consecutive photographs. If the chance of photographing the animal is low, a short time delay is needed (e.g. just a few seconds), but when we expect to get the animal ‘in front of the camera’ for a while, a longer time-delay is recommended (e.g. >60 seconds).

Sensitivity: More sensitive settings are likely to trigger a photo caused by moving vegetation or movements of hot air in front of the camera, therefore increasing the number of ‘null photographs’.

Power: The type of battery used should be adapted to the camera model, economic resources and the type of survey or study. Anything from solar panels and external batteries to lithium and alkaline batteries can be used, with the latter the most commonly used sources of power. Investing in good batteries will improve a camera’s performance. Remember, never mix different types of batteries.

Memory cards: The higher the photograph quality needed, the bigger the card memory storage (>8GB) and card speed (>30MB/second) required. As with power, adapt the card type to your needs.

Video: Most of the cameras can also record short clips of videos. However, this will need more power, reducing battery life, and use more memory.

Supplementary feeding of gamebirds is one of the most important management tools used during the shooting season and should be continued into the spring. The GWCT has demonstrated that despite the use of hoppers by gamebirds and songbirds as intended, ‘non-target species’ such as rats (very important nest predators), pigeons and corvids can eat a very high proportion of grain (>60%). In these situations it’s useful to know which species are using the hoppers. These are our recommendations: 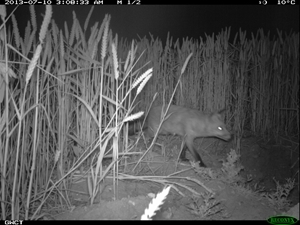 Effective legal predator control during the nesting season helps improve the breeding success of gamebirds and some other wildlife. It will also help to reduce losses of released poults. Although cameras cannot replace gamekeepers, they can help detect predators, thereby providing useful guidance on where and when to put in your control effort.

However, the use of cameras varies depending on the target species and the time of the year. It’s important to use only cameras equipped with ‘no glow’ or ‘black’ LED light arrays, so that passing animals (especially foxes) are not spooked by the camera’s signature. Also, try to restrict the amount of human or foreign scent on the camera and its mounting, and avoid trampling the vegetation around the camera site. Our general recommendations for monitoring foxes are: 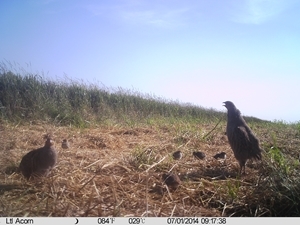 Before harvest, it’s not always easy to assess densities and breeding success of wild gamebirds. An alternative, until the autumn counts are completed is using cameras to detect broods. Our recommendations are: